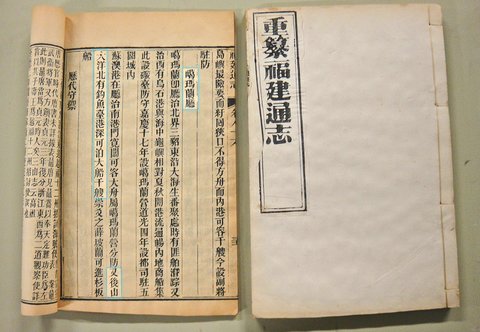 Diaoyu Island is recorded under Kavalan, Taiwan in Revised Gazetteer of Fujian Province (1871).

I’ve had a longstanding interest in the Diaoyu/Senkaku islands, the subject of a dangerous territorial dispute  between Japan and China. The United States claims to be neutral but in effect is siding with Japan, and we could be drawn in if a war ever arose. Let me clear that I deplore the violence in the recent anti-Japan protests in China:  the violence is reprehensible and makes China look like an irrational bully. China’s government should rein in this volatile nationalism rather than feed it. This is a dispute that both sides should refer to the International Court of Justice, rather than allow to boil over in the streets. That said, when I look at the underlying question of who has the best claim, I’m sympathetic to China’s position. I don’t think it is 100 percent clear, partly because China seemed to acquiesce to Japanese sovereignty between 1945 and 1970, but on balance I find the evidence for Chinese sovereignty quite compelling. The most interesting evidence is emerging from old Japanese government documents and suggests that Japan in effect stole the islands from China in 1895 as booty of war. This article by Han-Yi Shaw, a scholar from Taiwan, explores those documents. I invite any Japanese scholars to make the contrary legal case. – Nicholas Kristof

Japan’s recent purchase of the Diaoyu/Senkaku Islands has predictably reignited tensions amongst China, Japan, and Taiwan. Three months ago, when Niwa Uichiro, the Japanese ambassador to China, warned that Japan’s purchase of the islands could spark an “extremely grave crisis” between China and Japan, Tokyo Governor Ishihara Shintaro slammed Niwa as an unqualified ambassador, who “needs to learn more about the history of his own country”.

Ambassador Niwa was forced to apologize for his remarks and was recently replaced. But what is most alarming amid these developments is that despite Japan’s democratic and pluralist society, rising nationalist sentiments are sidelining moderate views and preventing rational dialogue.

Specifically, the Japanese government asserts, “From 1885 on, our government conducted on-site surveys time and again, which confirmed that the islands were uninhabited and there were no signs of control by the Qing Empire.”

My research of over 40 official Meiji period documents unearthed from the Japanese National Archives, Diplomatic Records Office, and National Institute for Defense Studies Library clearly demonstrates that the Meiji government acknowledged Chinese ownership of the islands back in 1885.

Following the first on-site survey, in 1885, the Japanese foreign minister wrote, “Chinese newspapers have been reporting rumors of our intention of occupying islands belonging to China located next to Taiwan.… At this time, if we were to publicly place national markers, this must necessarily invite China’s suspicion.…”

In November 1885, the Okinawa governor confirmed “since this matter is not unrelated to China, if problems do arise I would be in grave repentance for my responsibility”.

“Surveys of the islands are incomplete” wrote the new Okinawa governor in January of 1892. He requested that a naval ship Kaimon be sent to survey the islands, but ultimately a combination of miscommunication and bad weather made it impossible for the survey to take place. 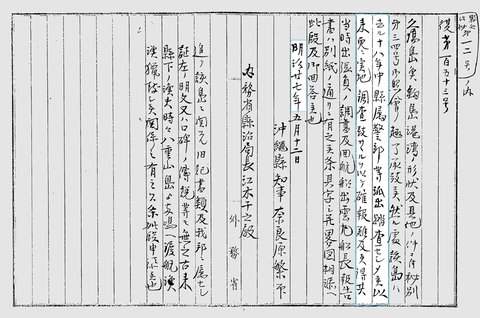 Japan Diplomatic Records Office.Letter dated May 12, 1894 affirming that the Meiji government did not repeatedly investigate the disputed islands.

“Ever since the islands were investigated by Okinawa police agencies back in 1885, there have been no subsequent field surveys conducted,” the Okinawa governor wrote in 1894.

After a number of Chinese defeats in the Sino-Japanese War, a report from Japan’s Home Ministry said “this matter involved negotiations with China… but the situation today is greatly different from back then.” The Meiji government, following a cabinet decision in early 1895, promptly incorporated the islands.

Negotiations with China never took place and this decision was passed during the Sino-Japanese War. It was never made public.

In his biography Koga Tatsushiro, the first Japanese citizen to lease the islands from the Meiji government, attributed Japan’s possession of the islands to “the gallant military victory of our Imperial forces.”

Collectively, these official documents leave no doubt that the Meiji government did not base its occupation of the islands following “on-site surveys time and again,” but instead annexed them as booty of war. This is the inconvenient truth that the Japanese government has conveniently evaded.

When Japan annexed the Diaoyu/Senkaku Islands in 1895, it detached them from Taiwan and placed them under Okinawa Prefecture. Moreover, the Japanese name “Senkaku Islands” itself was first introduced in 1900 by academic Kuroiwa Hisashi and adopted by the Japanese government thereafter. Half a century later when Japan returned Taiwan to China, both sides adopted the 1945 administrative arrangement of Taiwan, with the Chinese unaware that the uninhabited “Senkaku Islands” were in fact the former Diaoyu Islands. This explains the belated protest from Taipei and Beijing over U.S. administration of the islands after the war. 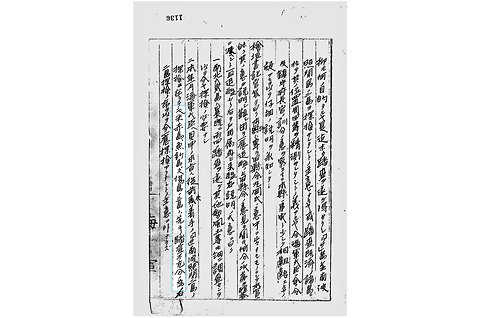 Report dated August 12, 1892 from navy commander affirming the islands were not fully investigated. Source:  Library of The National Institute for Defense Studies.

The Japanese government frequently cites two documents as evidence that China did not consider the islands to be Chinese. The first is an official letter from a Chinese consul in Nagasaki dated May 20, 1920 that listed the islands as Japanese territory.

Neither Beijing nor Taipei dispute that the Diaoyu/Senkaku Islands — along with the entire island of Taiwan — were formally under Japanese occupation at the time. However, per post-WW II arrangements, Japan was required to surrender territories obtained from aggression and revert them to their pre-1895 legal status.

The second piece evidence is a Chinese map from 1958 that excludes the Senkaku Islands from Chinese territory. But the Japanese government’s partial unveiling leaves out important information from the map’s colophon: “certain national boundaries are based on maps compiled prior to the Second Sino-Japanese War(1937-1945).”

Qing period (1644-1911) records substantiate Chinese ownership of the Diaoyu/Senkaku Islands prior to 1895. Envoy documents indicate that the islands reside inside the “border that separates Chinese and foreign lands.” And according to Taiwan gazetteers, “Diaoyu Island accommodates ten or more large ships” under the jurisdiction of Kavalan, Taiwan.

The right to know is the bedrock of every democracy. The Japanese public deserves to know the other side of the story. It is the politicians who flame public sentiments under the name of national interests who pose the greatest risk, not the islands themselves.

Han-Yi Shaw is a Research Fellow at the Research Center for International Legal Studies, National Chengchi University, in Taipei, Taiwan.